Continuation Betting means that the preflop raiser bets the flop. 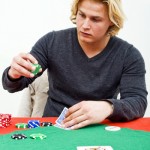 This move has been widely popularized after Harrington wrote about it in Harrington on Hold ’em Expert Strategy for No Limit Tournaments, Vol. 1: Strategic Play.

Most players are making heavy use of it nowadays and are betting the flop as a routine if they where the preflop aggressor.

Five years ago when continuation bets were not as common they were very successful. Nowadays most players expects a continuation bet and does not view it as a sign of strength. This means you should be a bit more selective on when to c-bet.

Bet size for continuation bets are normally between 1/2 the size of the pot and the size of the whole pot.  In general you should bet more if the board is wet than when it is dry.

Good conditions for a c-bet bluff

Bad conditions for a  c-bet bluff

How to defend against  c-bets

If you have a good hand you can act accordingly and call or raise depending on ranges, opponent and board etc.  But how can you defend if you don’t have a hand that is likely to be better than opponents or with a good draw?

There are two main strategies:

Most of the time you should fold if you don’t have a good hand though.

Because when you float on a wet board and the turn is a blank it is a higher risk that the opponent will put you on a draw and fire a second bullet. But a raise on a wet board is scary because opponent needs to think not only about hands that are beating him now – but also on the scary cards that may come later.