This site is mostly focused on No limit Cash games in Texas Hold’em. 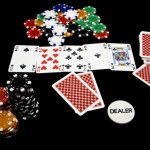 However, a lot of the content applies in Tournaments and Sit and Go’s as well.

In general you can play the same way in the early stages of a Tournament as you do in a Cash game with the following considerations:

Some people say you should take every chance to collect money at early stages, because otherwise you will have too small chance to win. This is not true. With a correct strategy for opening up your game when the blinds increase you will still have good chances of winning.  If skill advantage is ignored optimal strategy in a tournament is identical to a cash game when far from the money.

In a Sit and Go you need to play a little bit tighter. The reason for this is that the so called Bubble effect is noticeable from the very start of a Sit and Go (it is normally negligible in a large MTT (Multi Table Tournament).

The Bubble is what it is called when the tournament is at a stage so that it is getting close to the money payouts.  Usually many (inexperienced players) tighten up a lot at this stage because they really want something to show for their efforts. This can be taken advantage of by skilled opponents by raising with more hands and increased aggression. Due to something called Bubble Factor correct strategy is in general to raise when first in with more hands, but avoid confrontations more than normally (call or reraise with fewer hands).

The Bubble Factor helps you decide exactly how to play an optimal strategy at any time in a Tournament or a Sit and Go. The basis for this is something called the ICM (Independent Chip Model). The ICM is a way to convert tournament chips into real money. This is somewhat complicated (but very important). The more chips a player has, the less each chip is worth. Doubling the amount of chips does not double the dollar expected value ($EV).

The optimal strategy is fairly complex and depends on payout structure and stacksizes etc so for a full understanding of this part of tournaments and sit and go’s I recommend specialized sites and the following sources:

If you are playing Sit and Go’s and take it seriously I strongly recommend getting the Sit & Go Wizard. It is both an ICM calculator, but more importantly, you can practice with it to play a close to perfect end-game in Sit & Go’s. Try it for free for 30 days and make up your mind late.