Floating the flop means calling on the flop with a poor hand with the plan to bet on the turn if opponents check.

This works best under the following conditions: 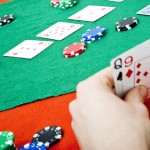 If the turn is hitting his range well you should consider abandoning the plan or at least wait for the river. For example if opponent has raised with 5 % range, the flop is 9 5 2 rainbow but the turn is an Ace. In this example opponent will have at least a pair 100 % of the time and a bluff is unlikely to succeed.

We look at an example with a dry flop since those are most commonly floated.

You are playing $1-2 No and raise to $6 from MP. A single opponent calls on the button. You have played him before and knows that he is almost only cold calling with low to medium pocket pairs.

So how should you proceed in this hand against an opponent who likes to float and is a good at it?

Most of the time your opponent will have a pair. He will probably call a flop bet most of the time, since the flop is not hitting your range well and he has at least a pair.

If you have two overcards, the best option might be to not bluff, just check and fold to a bet accepting the fact that your opponent is ahead of you most of the time.

If you have a big overpair, what to do then? Let’s say you bet on the flop, opponent calls. You bet turn and opponent raises? This will put you in a tricky spot, since you don’t want to let go of a pair of aces. But calling here and folding to all-in on the river does not feel good. And if you call here and call all-in on the river, you will in general give your opponent good implied odds for set-mining.

In this scenario the best defense is to check either on the flop or on the turn. This will make sure the pot does not get unreasonably big. If your strategy against this kind of opponent is to mostly check the flop with overcards it makes sense to check with aces here. If opponent bets you call the on the flop. If he continues to bet on turn and river, you can call him down without making the pot huge. If he checks the turn, you can bet the river most of the time to get value from his medium pairs – and most of the time call a raise. This way, by check calling him down the pot will become about $85 – or 42 big blinds. If he has a set you will have lost about 25 % of your stack – but that is not enough to give him proper implied odds to set-mine, considering that you will have overcards a lot of the time.

If opponent has a wider range it is usually best to c-bet this flop since it is unlikely to have hit him. If he calls now, he might have a weak pair. How to proceed now will be dependent on game-flow and opponent tendencies.