Most players who play poker are unfortunately losing money (about 95 %).
To become a winning player you have to make some effort to improve your game.
This article describes some of the main elements of winning poker. 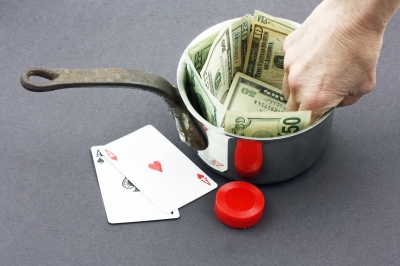 This may seem obvious, but many players underestimate the importance of this. Unless you are playing for fun or for temporary learning, you should always strive to play players who are worse than yourself.

If you play with players who are equally or more skilled than your are, you will loose in the long run. Even if you play players who are slightly worse than you, you might be losing – because of the rake that you play to the poker room.

If you are playing at a table and you can’t identify at least one or two persons who are playing significantly worse than you, you should normally move to another table or take a break.

See our advanced article on Table Selection for more info on how to select the good tables.

Use odds to your advantage

But you need to understand (either intuitively or analytically) if the odds for something to happen is favorable compared to the  probability that it will happen.

Read the article on Odds and Outs for more information on how to use Odds to your advantage.

The rake is the fee poker rooms are charging for the privilege to play there. Rakeback is a percentage of that fee that is paid back to the players, usually about 30 % of the rake.

In order to get rakeback you need to sign up with a partner (affiliate) to the poker rooms, and not with the poker room directly. Many sites are offering rakeback, and this is one of them.

Rakeback might not be necessary to be a winning poker player – but it sure makes it a whole lot easier.

Essentially you gain something in poker when an opponent is making a mistake and you lose something when you make a mistake  – over the long run.

You are drawing to a flush and the pot is $30 on the turn. Opponent bets $5. You call and on the river you complete your flush. Opponent check, you bet $20 and he calls.

In this example opponent made a mistake (at least if he had reason to believe you might be on a flush draw) by betting to small and giving you correct odds to call.

In this example you got lucky and completed your flush which you will only do about 18 % of the time. But over the long run you will gain by the opponent’s mistake, and he will lose.

So essentially  poker is about trying to make as few mistakes as possible and take advantage of opponents mistakes.

But since poker is so complex (which makes it very interesting) no one plays without mistakes, not even the world-class players!

Play a lot (or be lucky)

Over the long run the best players will always earn money.

But in the short run anyone can lose, no matter how much better than the opponents they are.

Most beginners (and many experienced players) underestimate how much you need to play for skill to significantly factor out luck.

There is nothing strange or uncommon for a highly profitable player to have a losing streak of 10 000 hands.

In live games that translates to about 300 hours.

So don’t become to cocky just because you have won the last three sessions of you local home game!

Disappointed? Well, so am I. This is the main reason why I mostly play live games for fun. But when you play online – if you play multiple tables I think it is ok.

Ah, but I just want to have fun!

Sorry, I believe there are few winning players at  decent levels who do not have a lot of discipline – at least in some areas.

You need discipline to: