The value of position in poker, especially in Texas Hold’em is huge. 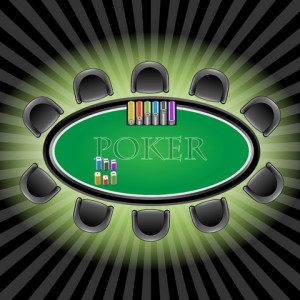 Having position on someone means that you act after them.

You have probably heard terms like Early Position, Middle Position, Button, Under-the-gun (UTG) etc.
Early Position means that you are sitting close to the blinds and will act early in the hand, especially preflop, when the blinds are acting last.

The benefit with having position on someone is that they will act before you, so when it is your turn you will have gained information. And information is money in poker.

If you are first to act at a Full Ring table you will have 8 or 9 people to act after you. It is natural that you need a very strong hand to be able to open the pot. To understand this fully let’s imagine you open the top-10 % best hands. If you do that it is more than 50 % likely that one of the following players will have a better hand, if you open with the worst hand in your range (1 – 0,1 to the power of 8 => 60 % chance). In other words, if you open with a 10 % range UTG at a Full Ring table you are not a favorite to have the best hand. Furthermore, it is also likely that someone with a stronger hand will get involved AND have position on you throughout the hand.

On the other hand, if you are on the Button and open with a 30 % range there will only be two players left to act and the chance that you have the best hand is almost 50 % (1 – 0,7*0,7). AND you know you will have position throughout the hand.

These are the reasons why poker players play very few hands from Early positions and a lot more from Late position (not as extreme when the game is shorthanded).

Think about this the next time you consider opening a decent, but not great hand UTG in a Full Ring game next time. Even if you believe you have a skill advantage over your opponents (make sure you have enough games at the level under your belt to be sure of this) you might well be playing a hand with a card disadvantage and a positional disadvantage. Have a clear reason for playing the hand if you do, for example that table is folding much too often, or for deception (occasionally) or since you are much stronger than the opponents. Otherwise fold!

An example of the value of position preflop is you hold a fairly strong hand in late position. A TAG (Tight-Agressive) UTG open raises and a TAG Middle Position reraises significantly. Now you can throw away a pair of 8’s in late position without having invested a single bet. On the other hand, if you had been UTG you would have open raised with this hand – without any information about how your opponents like their hands.