Bluffing is an essential skill in No Limit Texas Hold’em. And difficult. Do it too much and you lose tons of money. Do it too little and people will be able to read you very well (unless you play small stakes). 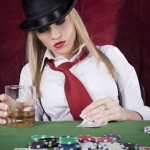 On this site there are specialized articles on the most important bluff situations:

Bluffing is a complex topic and very situation specific. But some general things to think about when you are considering making a bluff are: 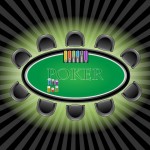 Some players have complicated rules for how they chose a seat with different rules for maniacs, LAGs, TAGs, shortstacks etc.

Personally I only have one guiding principle.

Sit with position on the players you will profit most from.

Or in other words, sit to the left of the fish. When doing your table selection you have identified your target fish, when selecting a seat you choose the position that gives you the best possibility to earn as much as possible from the fish.

There are many alternatives to choose from but I believe these are the main alternatives:

It seems that all four has what is needed to make good table selection. So it is probably natural to choose the one connected to the tracker you are using. If you have Pokertracker (although the monthly fee may make you look for alternatives) or Holdem Manager and otherwise take a look at PokerTableRatings.

I am trying out TableScan Turbo right now and it seems to be good. First I couldn’t get it started though, so I am not entirely convinced yet.

Personally I use Table Tracker (screenshot above) which is mostly satisfying my needs. I use a customized scoring system where I give points at a Full Ring table:

On top of this I hide tables with too many short stackers and I color code tables with at least 2 players playing 1 or 2  tables.

The good thing with Table Selection Software is that they allow you to customize your scoring. Some players play better against certain types of players than others do – so you should put some thought into what works best for you.

An issue with the whole Table Selection business is that you need to play a lot to have enough hand histories to find the fish in a good way. Or datamine or buy hand histories – but this is not allowed by most poker rooms.

If you have a lot of hands in your database but still frequently find that you have 50 hands or less on a lot of players an alternative strategy might be to choose tables with several opponents you don’t have stats on.

Good Table Selection is becoming more and more important as the average players are getting better and better, at least if you are playing above the micro-stakes.

So let’s imagine he is good at table selecting.  He manages to play with two fishes 20 % of the time, one fish 60% of the time and with tough players 20% of the time.

That’s a 50 % salary increase! Although this is a simplified and fictitious example it is by no means extreme.

Alright, let’s agree that table selection is very important. But how should it be done in a good way? 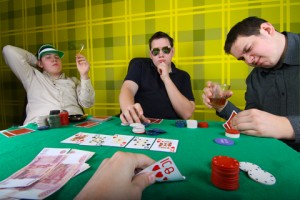 The most common advice is to look in the lobby and sort tables by how many players are seeing the flop and also look at the average pot size. If you are playing at microstakes, this is probably sound advice. There will be plenty of fishy tables to choose from and not so many tough tables.

At low and medium stakes this table selection strategy is not good enough (although better than nothing) for the following reasons:

For these reasons using table average is not the best strategy.

The alternative then is to actually find the fish individuals. This is how I do it:

To be able to do this effectively you more or less have to use table selection software.

A comment on the multitabling part. Some are actually thinking the other way around saying that if someone is only playing one or two tables you should avoid them, because they can pay much more attention to what is going on. Although this argument have some merit, in my experience these players are in average far worse than the average multitabler.

An alternative or complement to this strategy is to start up tables yourself or sit down at tables with free seats. Fishy players often don’t want to wait so they tend to choose tables with free seats. This might however not give you the biggest fishes available at any moment. And even more importantly, you have to be really good at playing Heads Up and really short-handed. If you are a 6-max or Full Ring player, you should be aware that Heads-up really is a very different game. And that it takes hundreds of thousands of hands before you can see from the results if you are good at it due to the enormous variance. 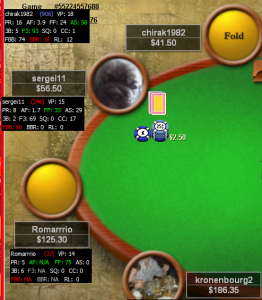 Before you make a bet in a poker hand you should always have a clear idea on why you are making it. Some people say there are only two reasons to bet, for value or as a bluff. On the river this is almost always true, but not necessarily earlier in the hand. 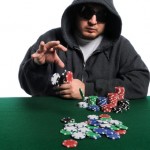